To pick up where I left off in my second HMI post, we had finished our main altitude adjustment period as well as completed most of our lectures and practice work on the nearby Rathong glacier. It was time for our final exercise: an altitude gain day with option of summiting a peak, weather permitting. The goal was to reach approximately 18,000 feet (previous high altitude was 15,500 feet on the glacier) -- and the summit of BC Roy Peak.

Panorama, hiking up from base camp to BC Roy Peak (appears at approximately

We set off at the not-so-alpine-start time of a late 6 am, and after crossing a river with tons of yelling and confusion and passing handfuls of sand to step on slippery rocks, started up the peaks north of camp. We hiked at a ridiculous climb rate of 40 ft/minute and continued for about 2 hours. Resting every hour or so, we made it to the snow/ice and put on crampons and other cold weather gear. Ropes were fixed and we used our ascenders (Jumars) as safety as we climbed the final ~2000 ft on snow, in mostly clear, sunny weather. As we reached the final resting spot (and a possible base camp for higher peaks) in a beautifully protected cirque, we organized into teams to try for the summit. 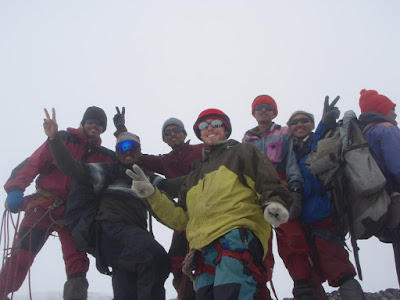 Celebrating at the summit of BC Roy Peak. I have no idea why I'm making the Peace Sign. It seemed like the thing to do. When in Rome, I guess.

I gathered the three remaining members of my team (of originally 10 people) and we picked up two more friends, so 5 of us were roped up together. I led the final couple hundred feet, kicking my own steps apart from other teams that were headed up the same peak. It was really cool to be given the responsibility to pick a safe route and be asked to do the work of kicking steps in the snow/ice. The final altimiter reading at the top of BC Roy peak was 17,765 feet.


(I misheard the altitude reading, and as you can see there was lots of excitement at the top.)

After summiting (er... doing an altitude gain exercise), our time at Base Camp came to a close. We played a few games of soccer and cricket, had a lecture or two more, and then headed out. 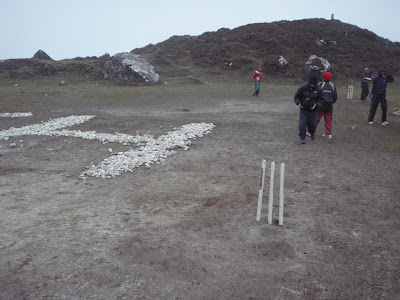 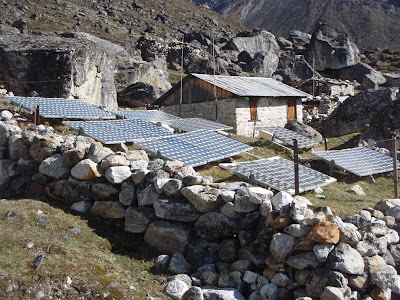 The solar panel array at Base Camp that I didn't know existed -- I didn't bring my camera battery charger! 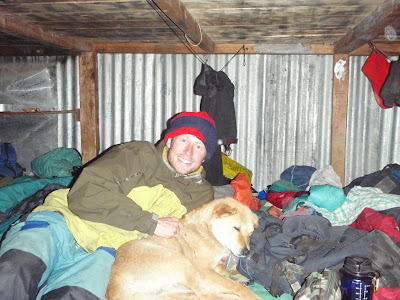 My friend liked to cuddle in the hut. He took a particular liking to me because (aside from feeding him), he knew that I, the sole White Dude, would always treat him well. My Indian counterparts were equally divided between petting him gently and kicking him -- confusing for me, let alone a dog! Street dogs in India have it tough.

Up at base camp there wasn't much to do, and because of the altitude we were asked not to sleep more than 8 hours per day -- luckily most of the Indians on the trip enjoyed singing continuously for hours upon hours.


Another nightmarish multi-day trek with 100 people (all hiking together, no gaps, etc.) later, we were back in Darjeeling at HMI.

We had a climbing competition on the outdoor wall (see last post) that I completely biff'd on... but the wouldn't let you study the route before starting your climb, so I'm writing that off as "bad practice." And we all then had a cross country competition. The race, for me, was more of race for the toilets, as my bowels weren't in the best shape. Still, I managed to take second place! The race was about 5 km, at 7000 feet, with hills, and my time was about 21 mins.

Finally, there was a graduation ceremony, where we all dressed up in matching pullovers. The presiding speaker (in addition to the Principal of HMI), was Nawang Gombu(wikipedia). Mr. Gombu(news article) was the first person to summit Mt. Everest twice, and lives in the Darjeeling area. 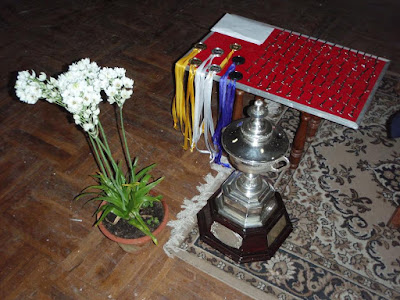 Each student was presented a pin. Additionally, three medals were given for boys and girls each in the Sport Climbing and Cross Country competitions. Additional awards were for "Best Technical Student" and "Best Overall Student." 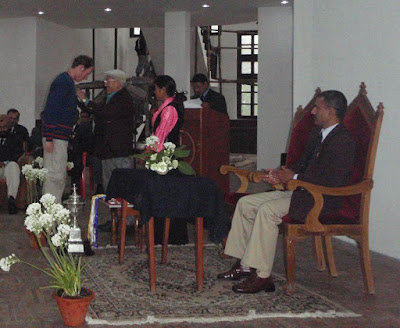 Me receiving my mountaineering pin from Mr. Gombu. He also presented me with my "Best Overall Student" and 2nd place cross country awards! 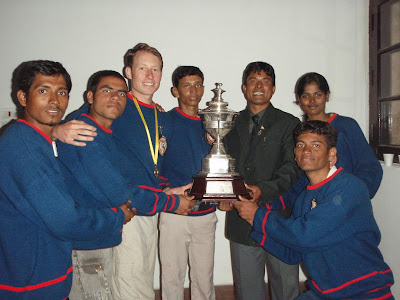 The team I led for a month, with our excellent instructor. "Rope 6" from left: Ashish, Ajeet, Holden, Saikat, Juna Sir (instructor), Hiten (in front), and Tumpa.

With that, the course finished, and we went our separate ways! I have to say that despite my concerns for the safety, organization, and discipline in the course, I am glad that I attended. Though I didn't learn many new things, I really did reinforce and get clarity on those skills I already possessed. I was able to help the other students with their knots, first aid, and mountain skills. I was recommended to take the Advanced Mountaineering Course and will consider that in the future!


And finally, here's a picture of my most-favoritest brillo pad salesman in the world (to date) showing off his wares. You'd think that displaying one of the many identical packs would be enough... and I really do wonder how many pads he sells in one day (in this miniscule town in Sikkim that has 3 streets (named "Street 1," "Street 2," and "Street 3")? 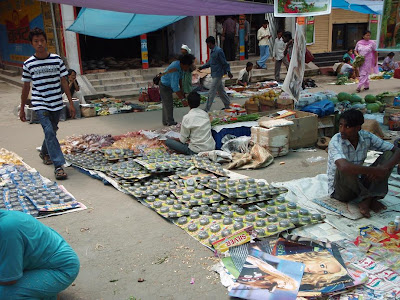