Seems like I fled from the hills just in time! After getting off the night train here to Calcutta, I read the papers with disbelief: the struggle for independence that has been going on in "Gorkhaland" for a quarter century turned violent towards tourists for the first time!

Just as all the warring parties in nearby Nepal agreed during my visit 3 years ago, hurting tourists helps no one. This, rationally, had been the stance of the Gorkha Janmukti Morcha group who has been leading the struggle for statehood thus far. They're still disavowing any voilence. Here's their cool flag: 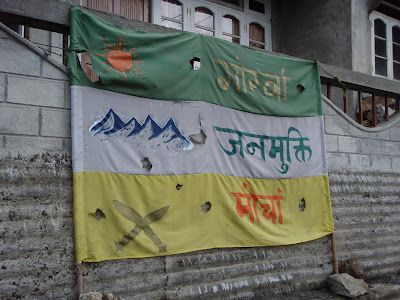 The Gorkha's basic accusation is that the northern parts the state of West Bengal are really not given proper infrastructure, and they'd like to be an independent state (instead of lumped in with all the plains down to Calcutta). Allegedly, the water pipe to the city of Darjeeling (a town of 100,000 people) has been severed for over 1 year, necessitating water be trucked in when the natural supply isn't enough. The roads are potholed fairly badly (not sure if it's worse than any other parts of India), and sometimes mudslides/erosion take the roads out completely. There's a whole lot more than this, but that's what I've come to understand while visiting.

For those wondering, these Gorkhas are the same group who have the really sweet knives. Gorkha, Gurkha, it's all Bengali/Hindi/Nepali to me:

I was originally going to take a night, tourist bus, but switched to train a few days before, on a whim. Turns out they started stoning the tourist buses. The paper that described the situation as I left: 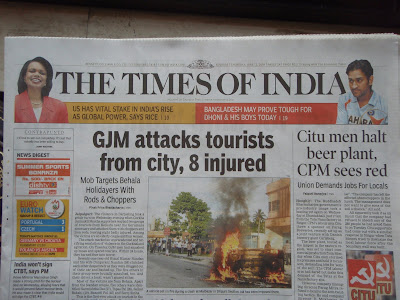 (Yeah, I noticed the right sidebar article, as well! Darn communists, shutting down the brewery!)

The indefinite strike is set to start in about a day, and one of the largest stores in Darjeeling (Big Bazaar) is showing empty shelves! Read the full article: "Chaos in Darjeeling - No Food, No Money" over at BeaconOnline:

[Photo from BeaconOnline.wordpress.com]
Read more on the struggle for Gorkhaland independence at this good interview.

If you're trapped there as a tourist, I'm sorry. I love the consolation that is being offered, 50% off your hotel stay... in a deserted town with no food, nothing open, no way to leave, and constant clouds & rain.