Most of you know that I really like the idea of electric vehicles as well as plug-in hybrid vehicles. Thanks to my friend SP for pointing out Mike Adams' (www.NaturalNews.com) great cartoon about "GreenBoasting." Adams writes:

"Why did Ford, GM and most of the American car companies ridicule Toyota over the idea of hybrid cars, and then later jump on the bandwagon with half-hybrid vehicles that don't really qualify as full hybrids in the first place? ... The truth is that auto companies are into GREENBOASTING -- the practice of spouting off environmental-sounding nonsense in order to please customers and increase sales."

While I do think that Tesla Motors have a fantastic vehicle, I think there's a better solution for me. For those that don't know, Tesla can boast some serious numbers (from their website): 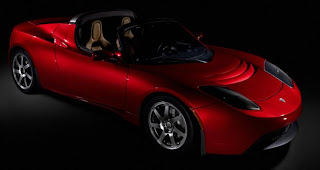 The "Better Solution" that's out there for someone that needs an everyday car, a daily driver, as opposed to a sports car, is the plug-in hybrid vehicle. This way, you can putz around town going to work and back on all electric power. When you do want to take a road trip, you can still fill up at the gas station.

There are the numbers from Aptera's plug-in hybrid (from their website):