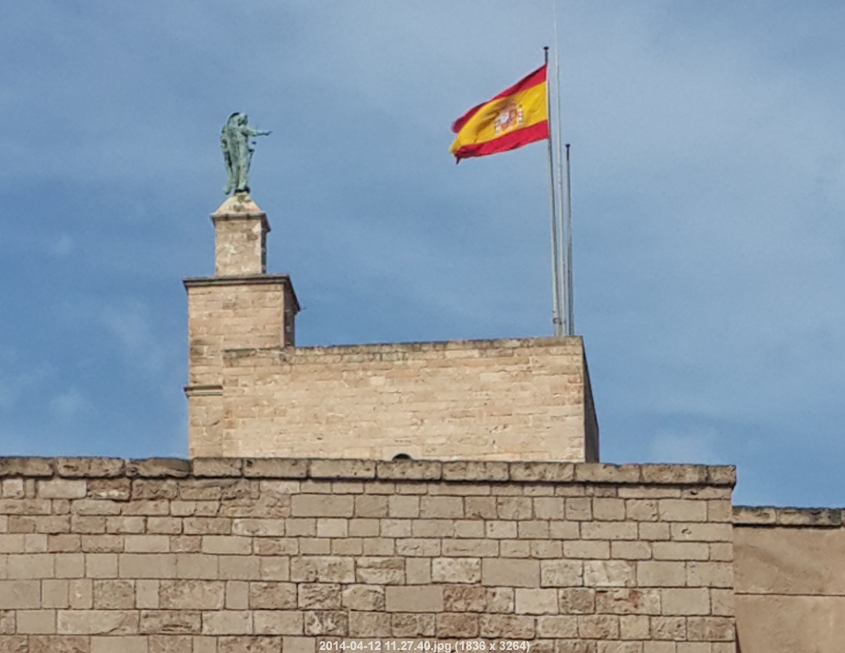 Although I've omitted a few trips lately, I thought I'd share some pics from my recent trip to Mallorca (Majorca), Spain. Beautifully warm, calm, and delicious.  Unfortunately, I went for kiteboarding, but there was almost no wind!

Cool goat hopping around on the rocks on my trip out to Cap de Formentor. 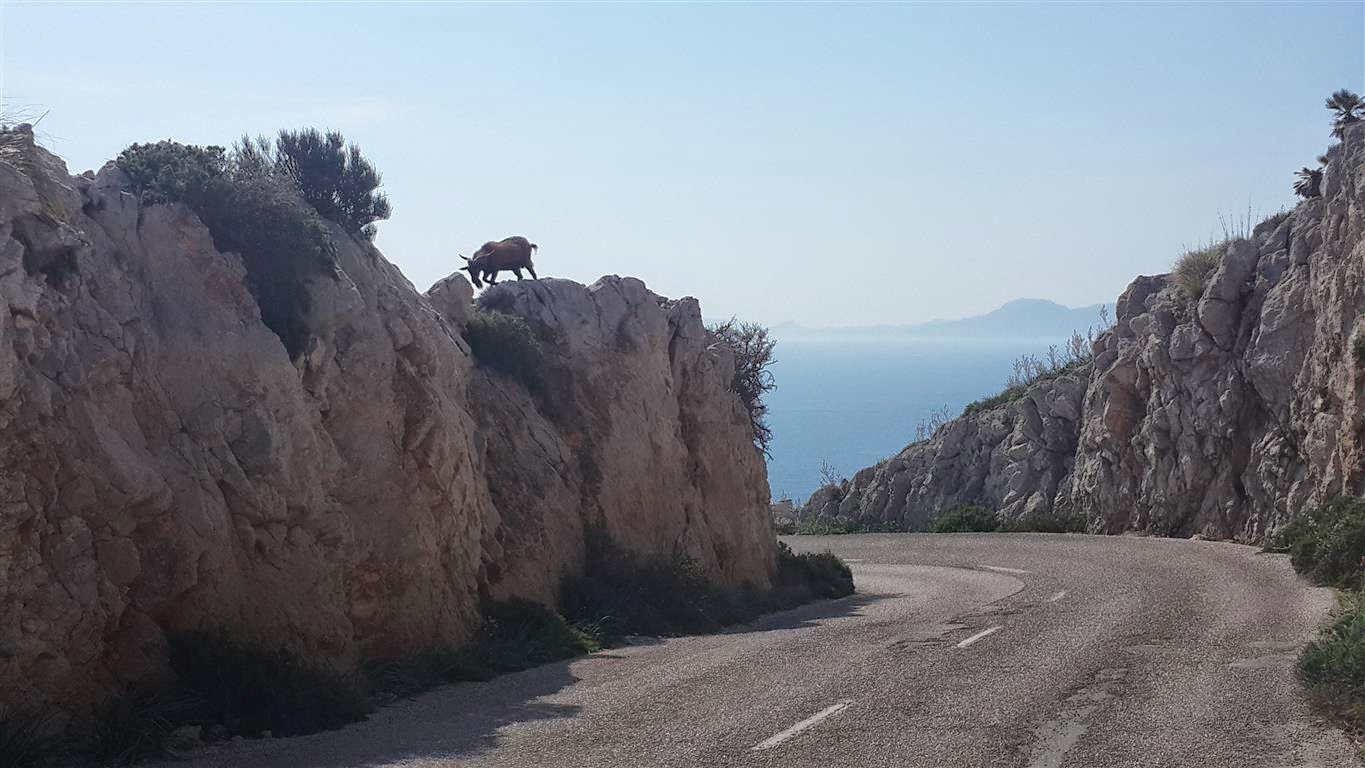 A panorama and a quick video of a great place not to fall down: 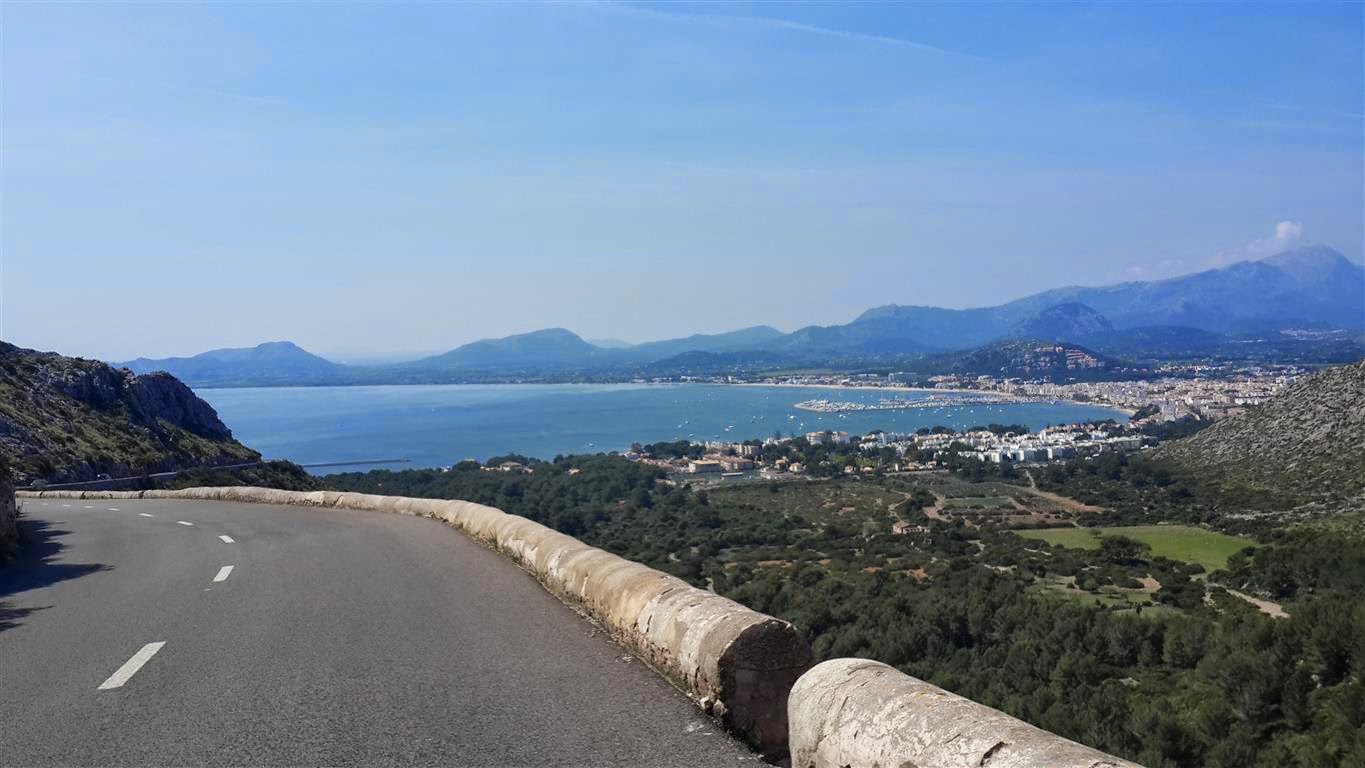 I love markets, and this one reminded me of the markets in Murcia, Spain - check out all the olives! 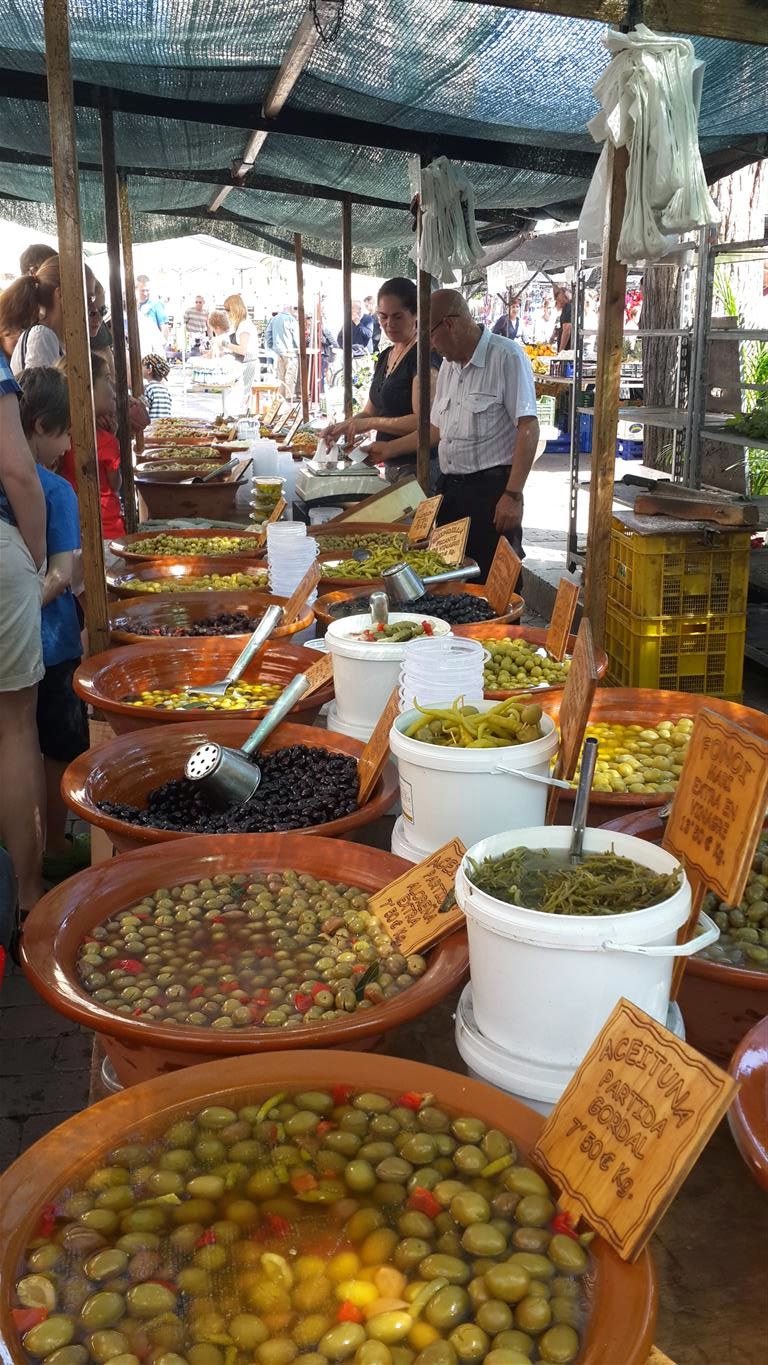 This island is INNUNDATED with German Ironman triathletes.  This picture captures it all - old but well preserved ruins, Sunday markets, and spandex.  Serious spandex and carbon fiber bikes. Check out this guy chomping down some calories! 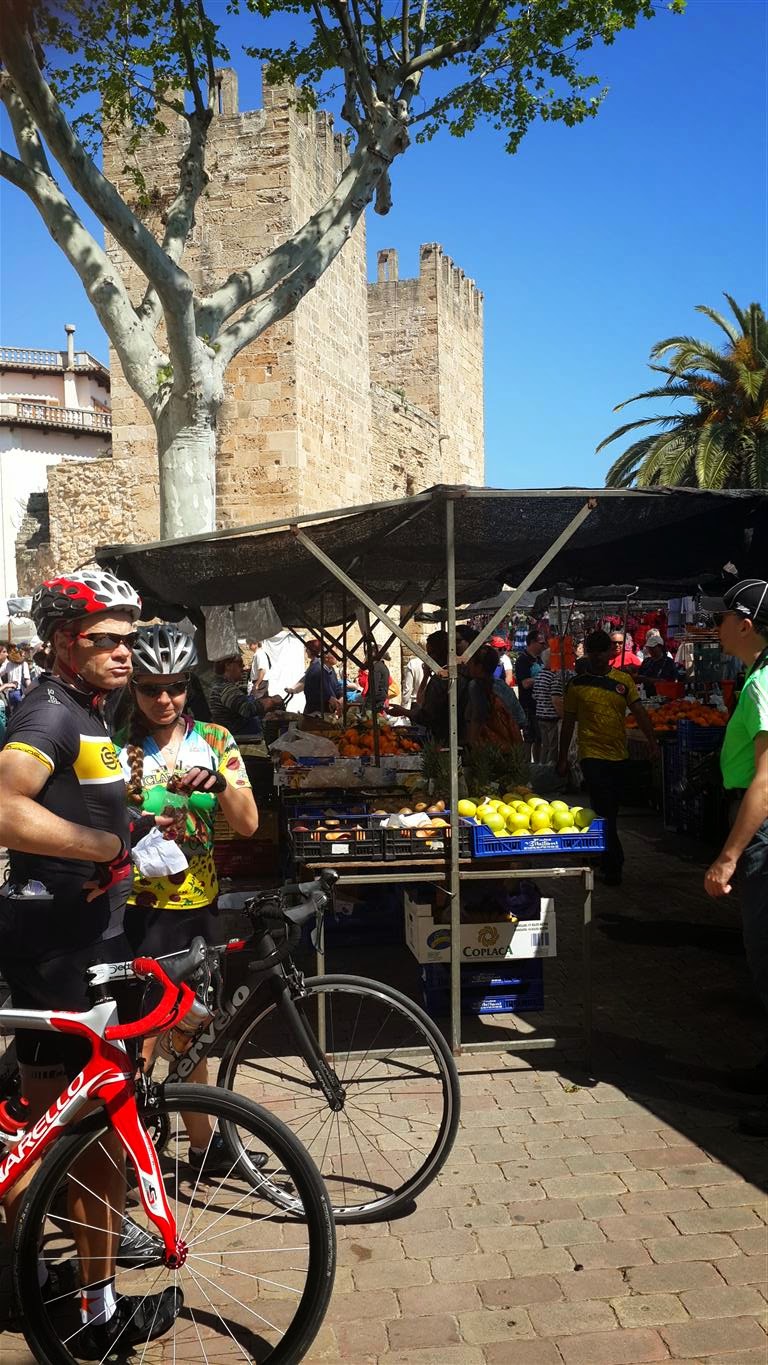 Incredible church from the 13th Century (allegedly by Knights Templar); this was one of more than a dozen side altars: 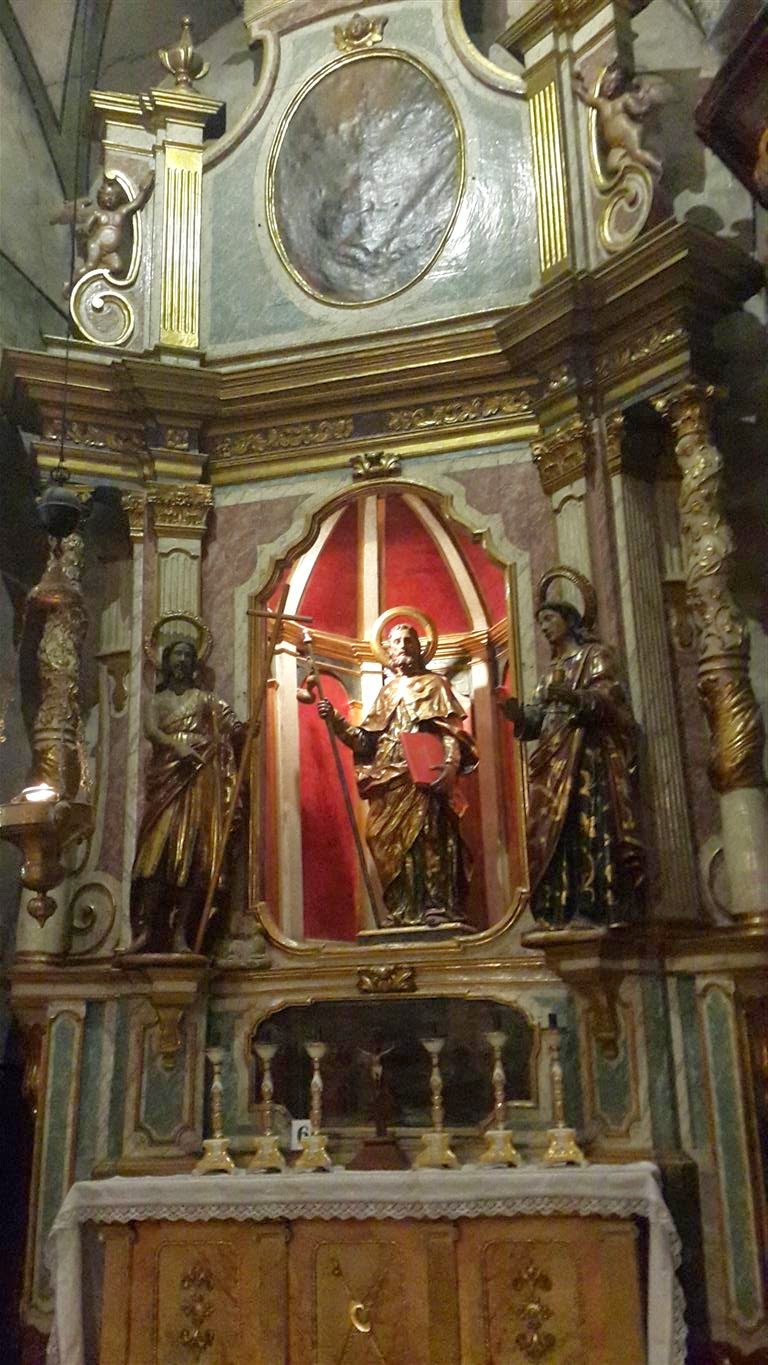 Incredible ceiling and rear of the church:

Lovely quiet side streets in the old town of Alcudia: 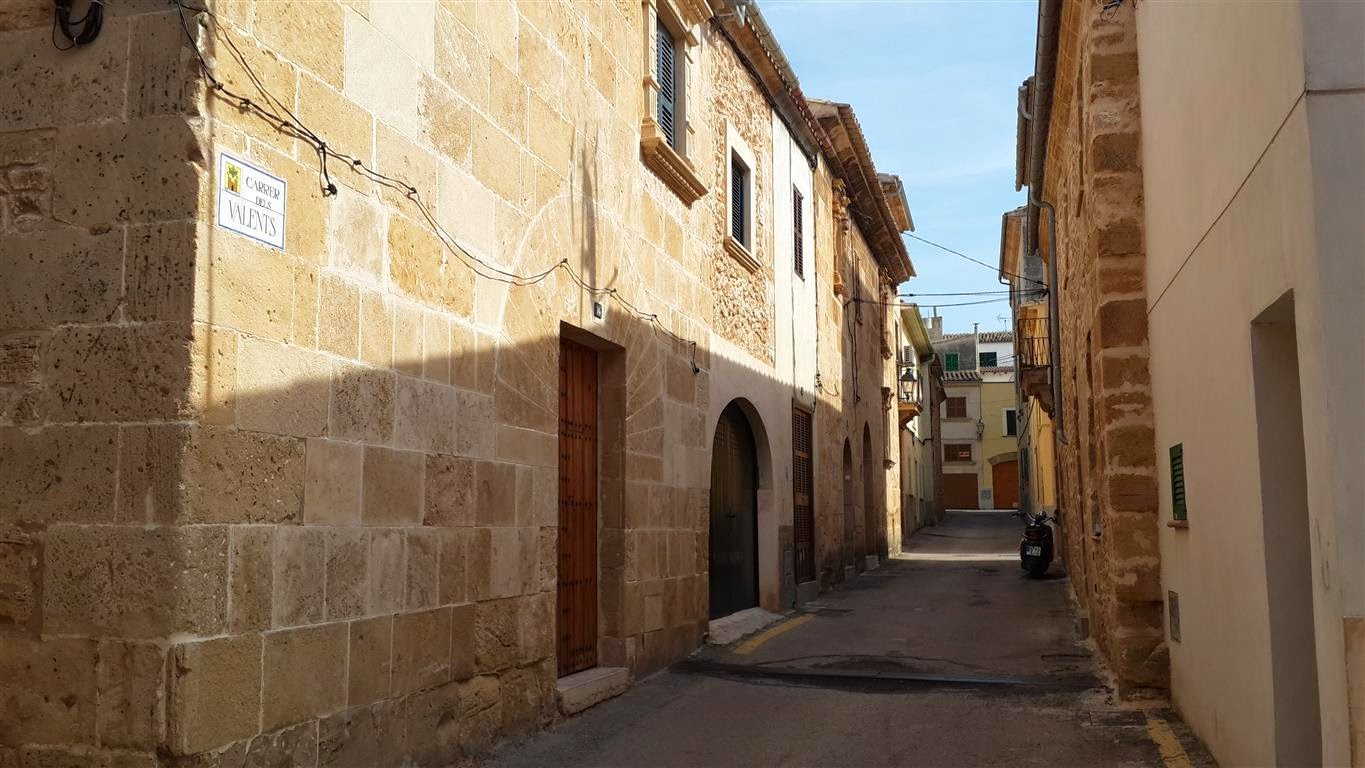 There's a bit of a sepratist movement going on - but they had better figure out a better way to leave graffiti that isn't so easily 'reversed.' 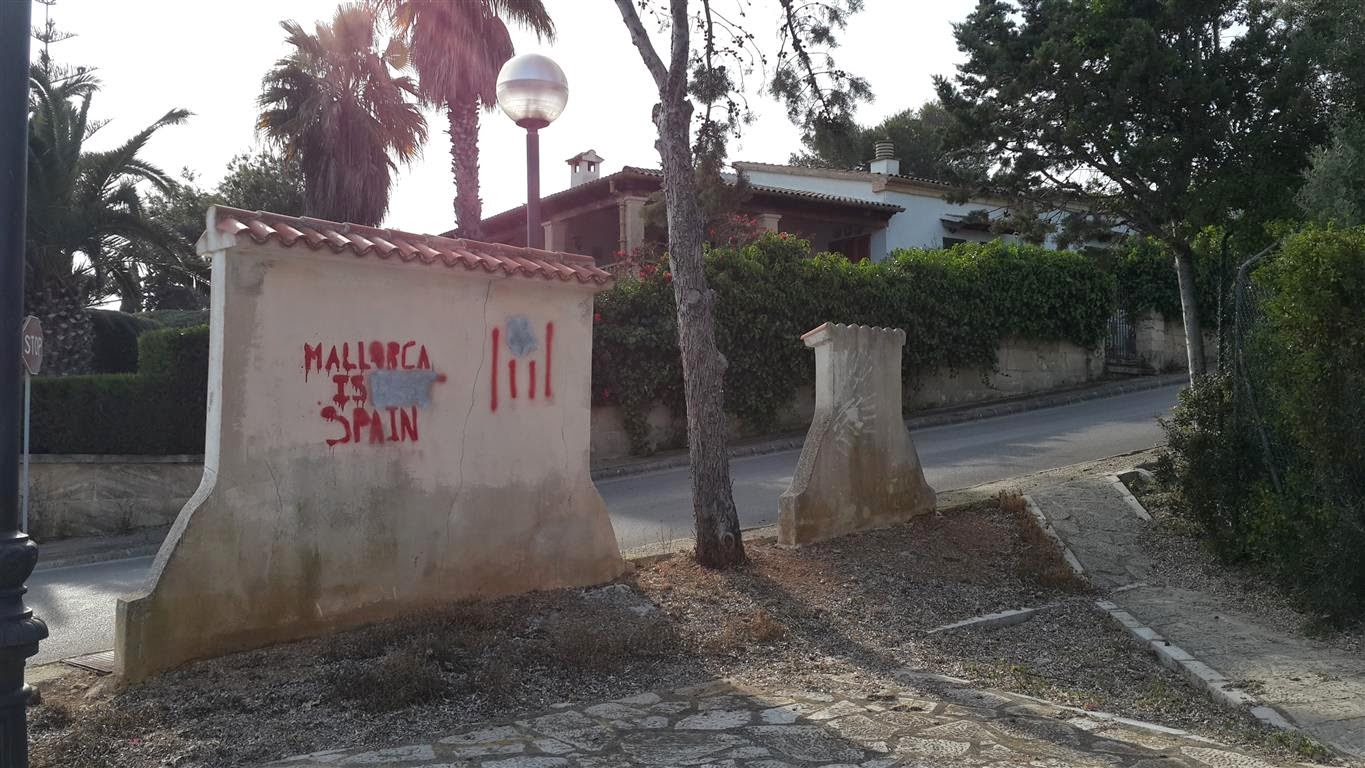 They take their cured ham seriously here; this photo was taken in a typical bar in Port de Alcudia. 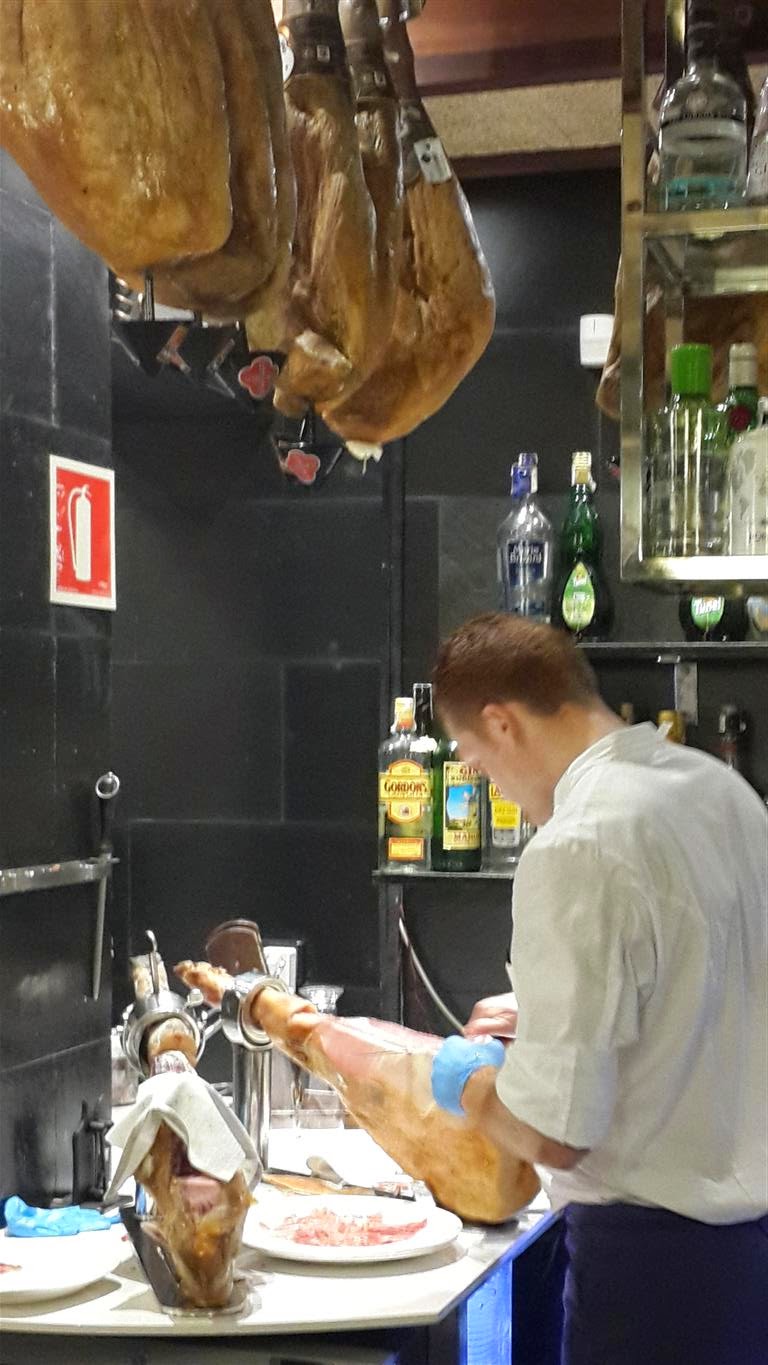 Email ThisBlogThis!Share to TwitterShare to FacebookShare to Pinterest
Labels: Mallorca, Places Not To Fall Down, Spain

Here's a quick writeup of a little side project which I've spent a small amount of time on over the past year.  It's an excellent case study in exploring something new and fun - and letting an idea go when the numbers don't add up: BottleBuddy! 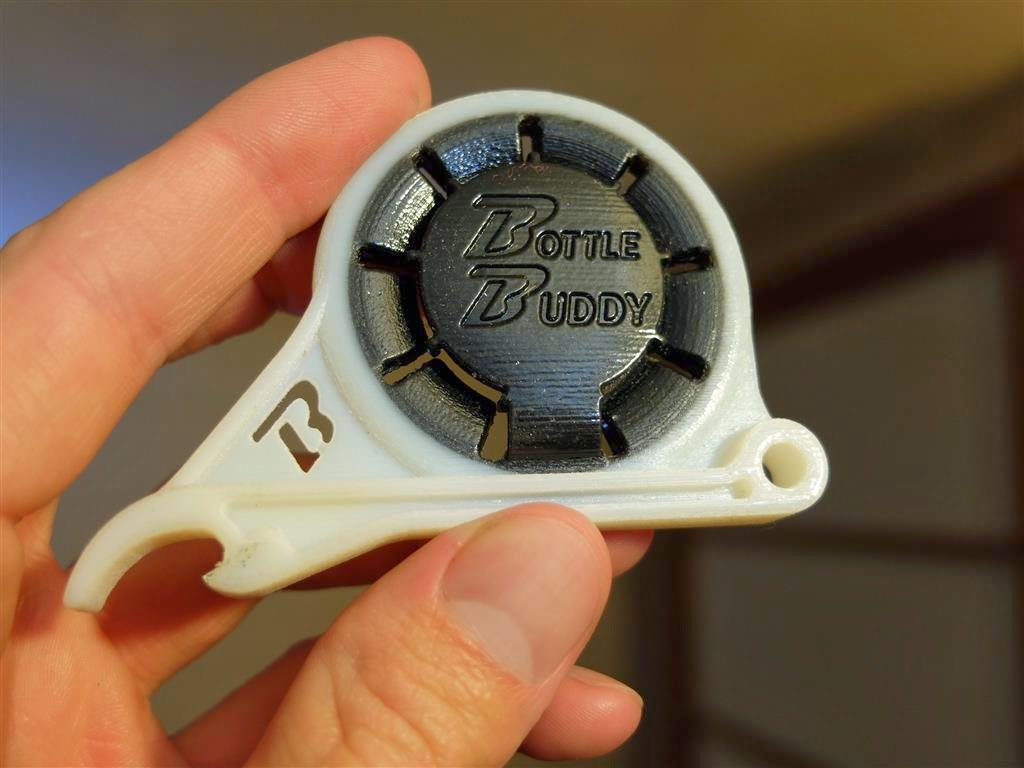 At a birthday party, I was telling a story and had to set my drink down to excitedly tell a story.  After the (no doubt uproarious) punchline, I looked back, dismayed to see that I'd set my beer down among others of identical brand, and similar level-of-consumption. Impossible to know which beer was mine, I realized there might be a market for a tool to identify different people's beers, similar to wine glass charms/tags for dinner parties.

I started out by designing a prototype, doing a bit of market research, and protecting the idea.  Here's the path I took, graphically, and then the steps I took, below.

I drew up some early designs incorporating a feature that would both identify the beer, and provide a bottle opener function: 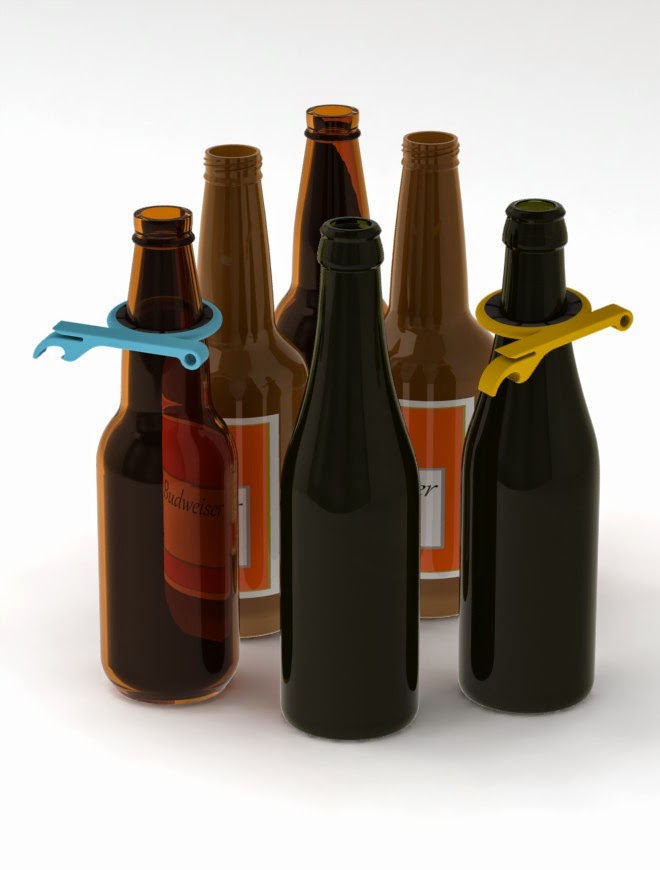 This was obviously too clunky, didn't offer much useful advertising space, and most importantly, would be very expensive to manufacture, due to mold sliders.  So on to revision 2:
(I realized that I'd need a metal insert to provide strength for opening cans, as below.) 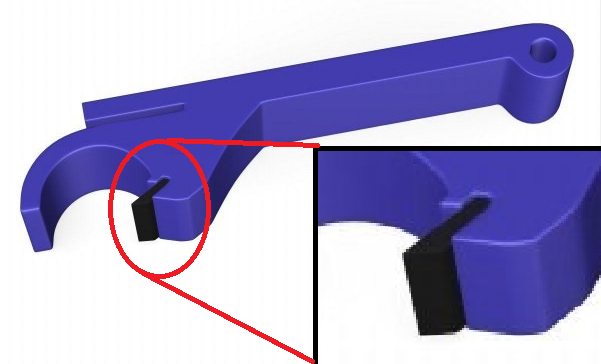 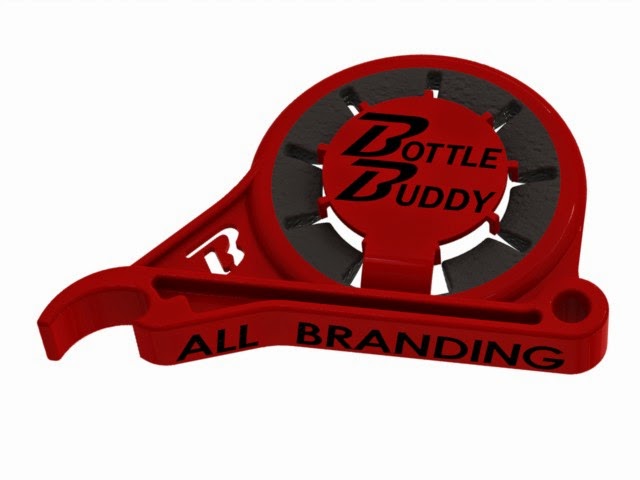 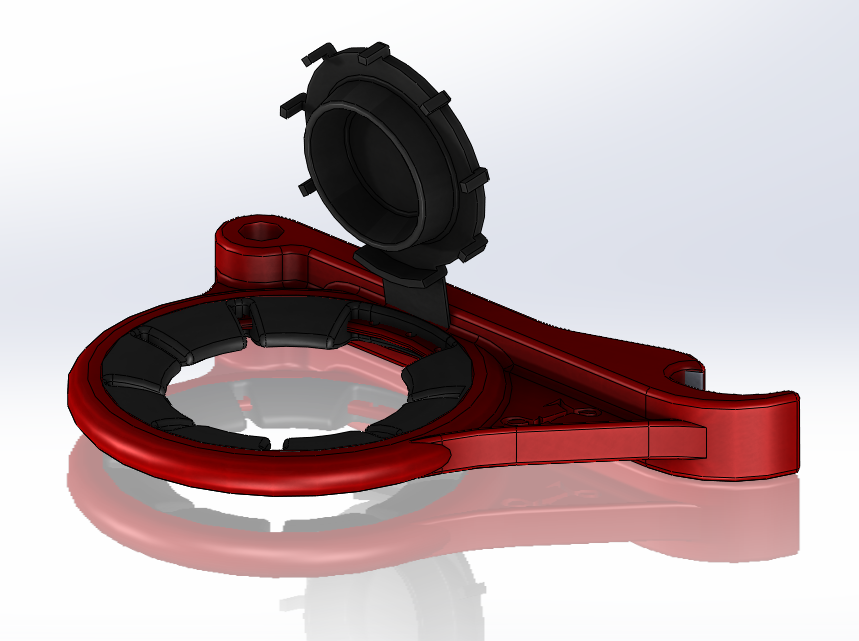 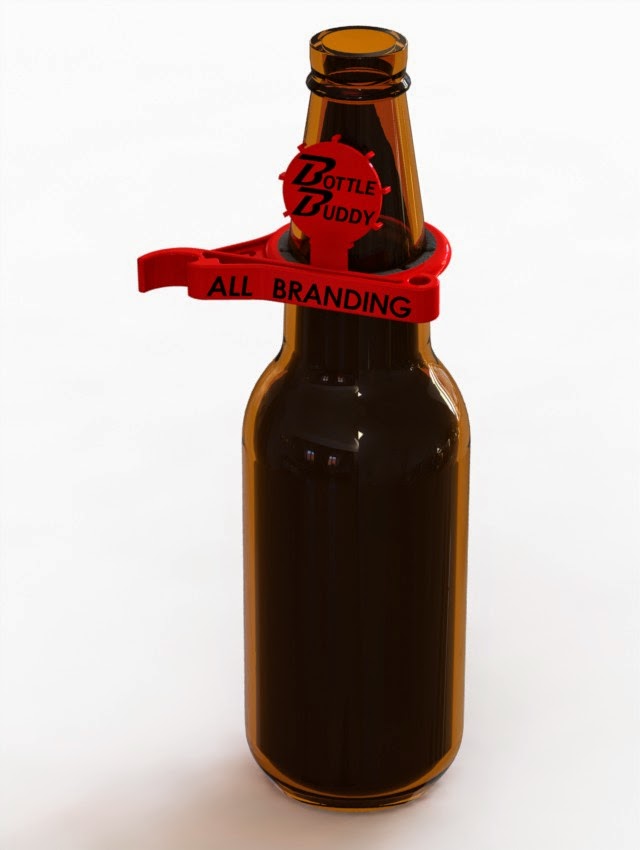 I made some prototypes along the way, first with a Dimension SST printer, and second with RedEye's awesome 2-material co-printing abilities (VeroWhite plus with a 40 Shore A Black soft overmold). 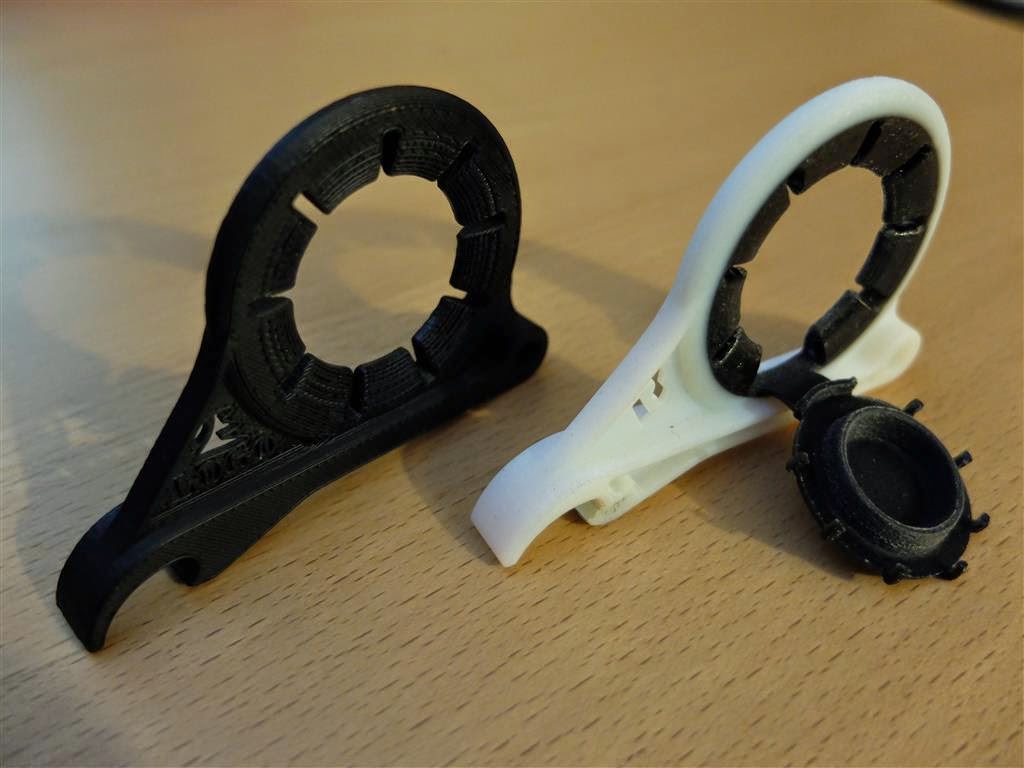 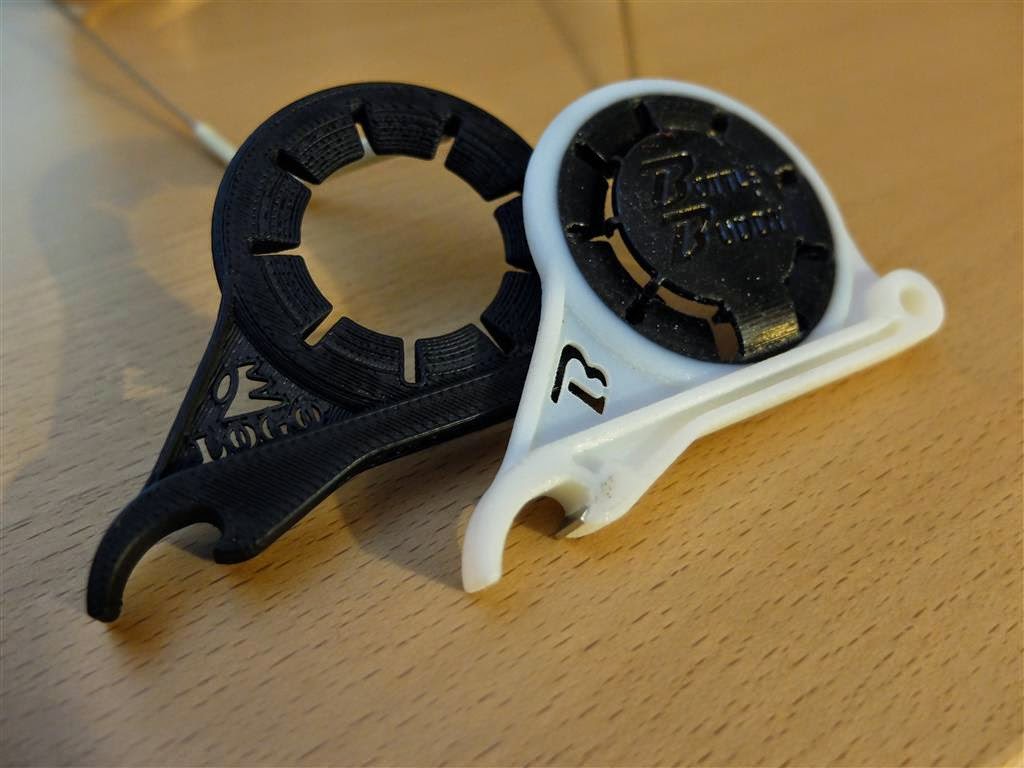 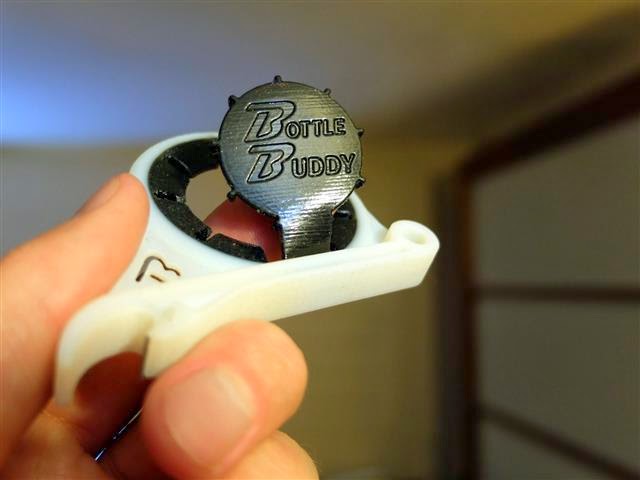 I didn't see many competitors in the marketplace - this was a double-edged sword: either I was saving an industry in need of a solution, or there simply was no need for the tool in general.

I conducted some internet research about how free promotional items / giveaways are brought to market, sold in batches and then distributed to users, called up a few people in this space and got their feedback.  While none had seen anything similar, they all questioned whether I could make it for a low enough cost - between 20 and 40 US cents a piece in large quantity.

The ASI is the major trade group organizing these widget people.

I drew up a few images with actual branding to act as a testbed - this product is not affiliated with Leinenkugel brewing in any way. I wanted to test a very long, wide beer name, but one with a round logo (figuring I could put "Bud" in the same space fairly easily). 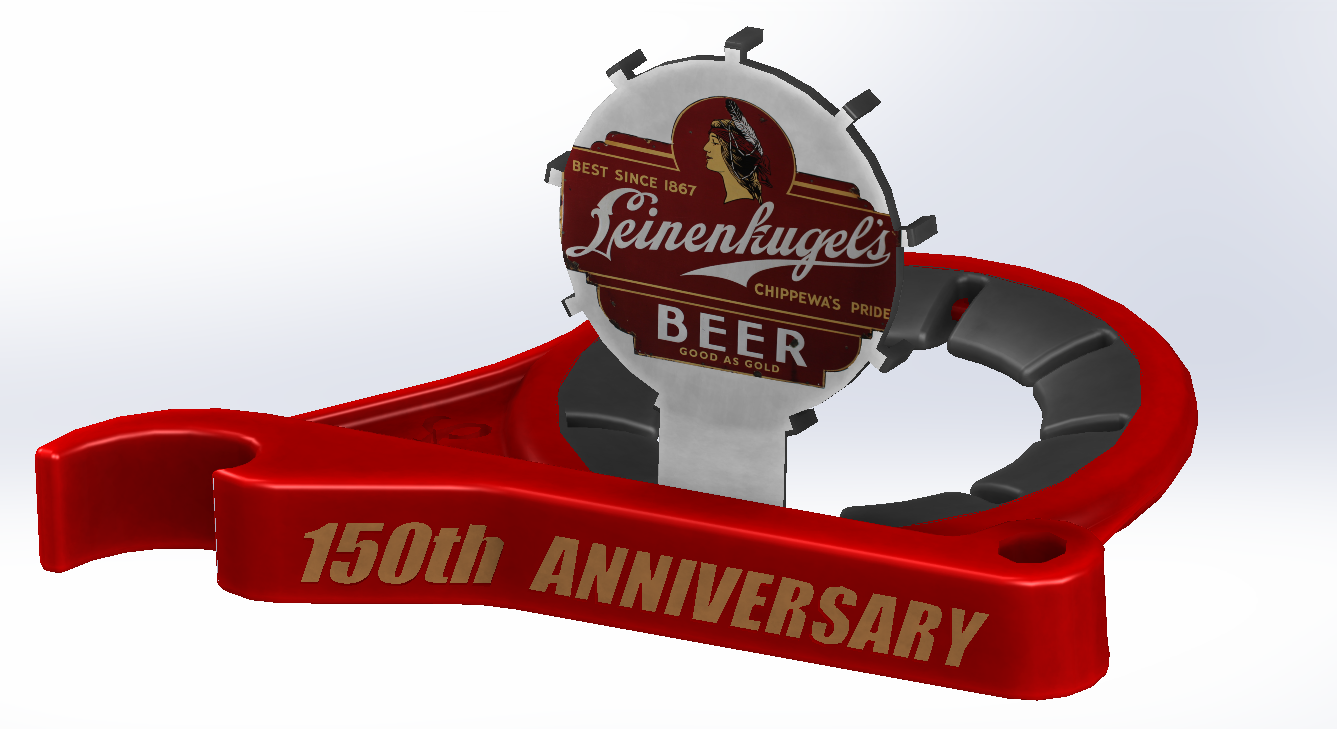 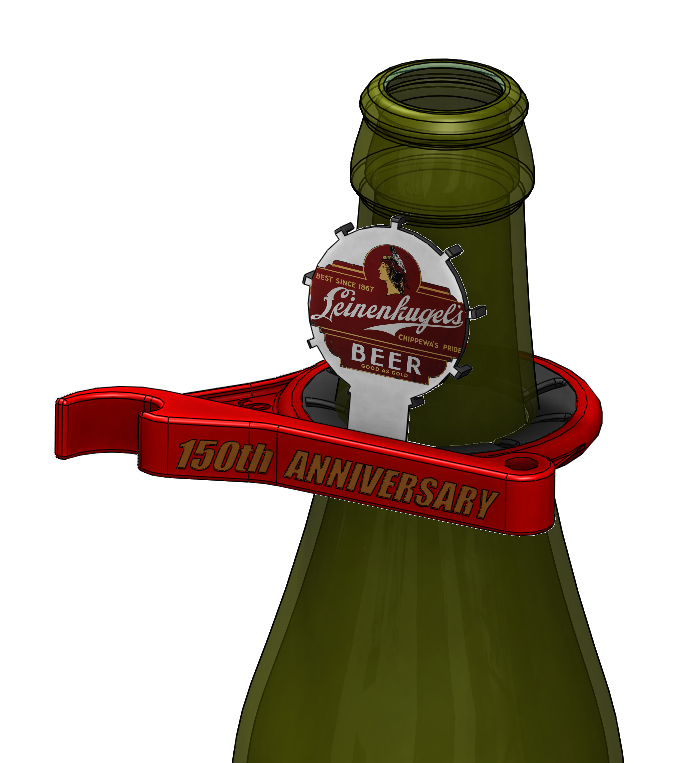 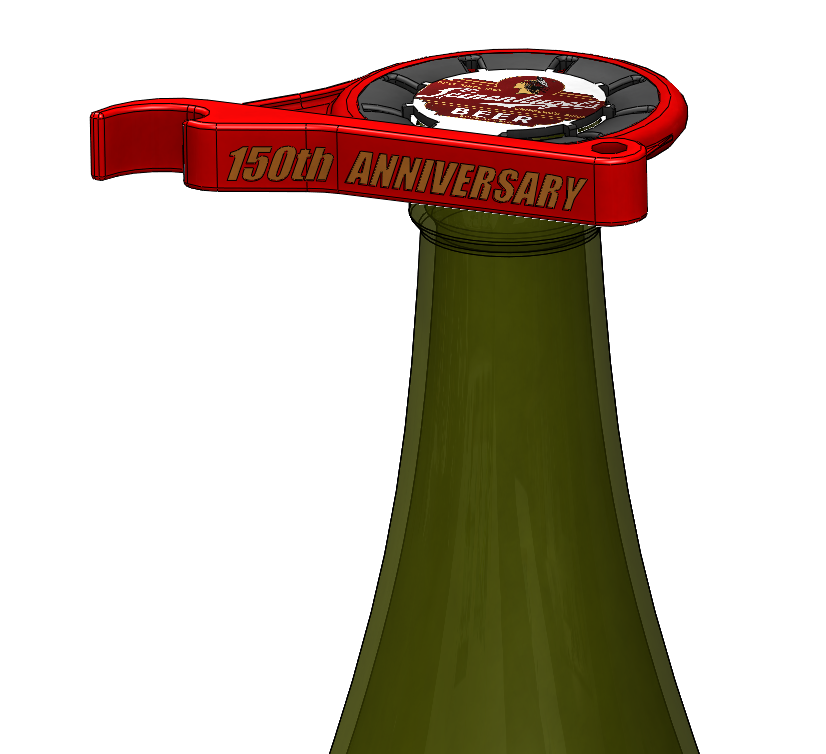 I solicited quotes from tooling manufacturers as well as final part manufacturers, and it looked like the cost of each part would only drop to about 50 cents each, before any silkscreening or shipping.  Yikes.

I wasn't worried about the mold cost; I would amortize it myself (rather than having the molder put it into the per-piece cost.  Depending on the quality of mold, the grade of material, number of cavities, I found quotes between $2k and $10k.  I knew that I needed to be selling 10's of thousands of Bottle Buddies, and so I figured with any real margin, this tooling cost would be paid back.

Finally, I put up a small, simple website, just to see if people would come based off of google adwords, etc.  (Short answer, a few did.)  You can find the website here.

I thought up a few different usage cases, penned them down, and combined with some detailed drawings.  You can access my provisional patent filing here. 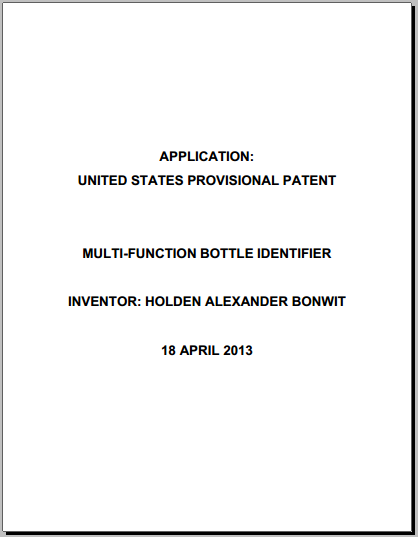 The provisional patent which I filed for BottleBudddy

A few images from it appear below, along with what is claimed. There are more images, as well as the use cases, etc., in the text of the application (above). 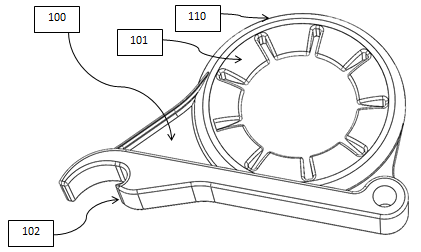 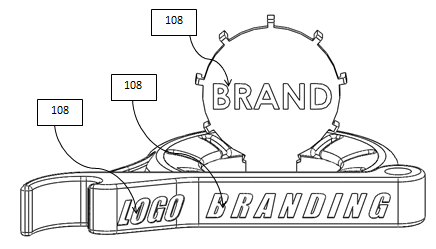 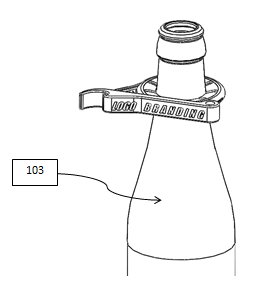 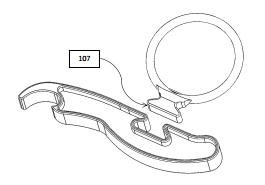 What is claimed is:

Addendum: some tidbits from my notes

Why not add something else to object:
key ring
whistle
pen
knife
lighter
double use as pony tail holder?

Add a magnet under the lip to catch the beer bottle caps!


1. Offer personalized engraving as an extra cost
2. Include stickers with letters in the pack (a block of 26 letter stickers), so you can label it yourself
3. His & Hers Bottle Buddy pack (World's Best Dad, etc.)
4. Add a simple metal loop for a keychain attachment, so you always carry it on your keychain until you're at a party, then you remove it & put it on the bottle
5. Deluxe versions: a larger one that has brass knuckle loops, so it gives your beer bottle brass knuckles - call it the Chuck Norris Bottle Buddy - also the hand grenade Bottle Buddy with removable pin

Brainstorm #2
What else goes with drinking?
Smoking: Create a deluxe version that has a lighter on it.  Now you have your bottle opener and a fancy lighter to show off.
How about a rubber extension cap that you can wrap over the top of the beer that covers the top so if you leave your beer for a bit, it is fully covered & can't spill. (optional add on)

In the end, I decided not to take the project forward, as it was simply not worth the time and effort for an industry-outsider.  Drop me a line, if you're interested to take BottleBuddy forward, I'm happy to let you!
Posted by Holden at 7:27 AM No comments: