... in which I freely admit that I only partially understood some of the topics which he discussed, but don't yet admit that his institution (which grew out of Oxford) is any more superior than my future institution.  :-)  Also, apologies for the poor grammar, sentence, and paragraph structure. 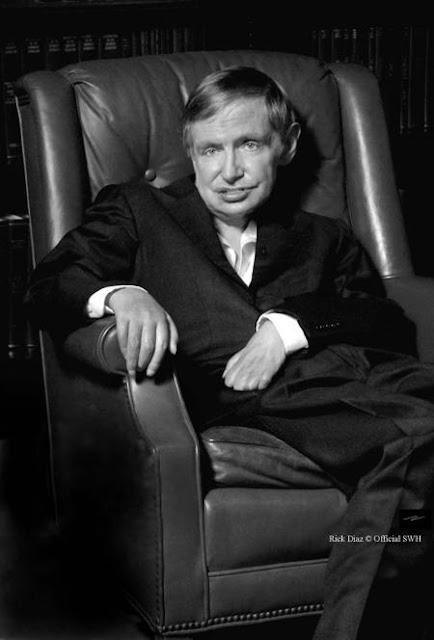 Overall, I loved the lecture.  It was accessible to someone who had only read "A Brief History of Time" but also engaging enough for the host professors to comment on new theories in the field.  Loved it.  Professor Hawking also has an awesome sense of humor. 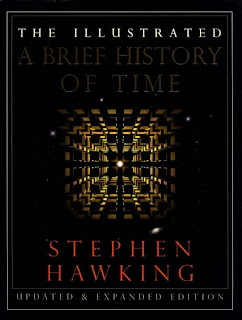 Notes:
Prof Hawking started with a rundown throughout the past few thousand years of humans' understanding of our role in the universe, starting with a tribal group (can't remember where) that believed a typical myth with a main god, who invented the sun, creatures, and stars.  Skipping along, he discussed Aristotle, and then Kant, who held that there are possible universes that exist in space independent of time.  Einstein came along and showed that there is a link between space and time.  Yay. 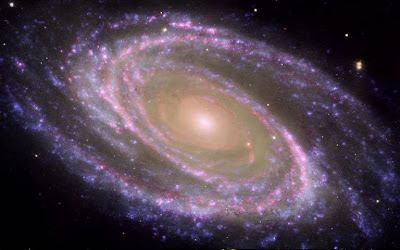 He discussed that time outside of the universe as we know it is undefined.  It's not that there is no time, or that time would run negative, but more like you couldn't have one without the other (I imagine this as us existing on an X,Y plane, and trying to graph a point with only one coordinate.  Impossible.

He mentioned how if we thought there was a specific start to time, we would probably have to arbitrarily pick it, and then that point would be incomplete, as one moment earlier there would be a lack of information (ie. no space).

He explained that one requirement of a good model was that it gave hypotheses that could be tested and proven true or false.  fuzziness in notes here...   (But that previous point is worth remembering!)

So then people (?) came up with the "Steady State Theory" that although galaxies were, indeed, spreading out, that new galaxies were continually being formed from newly created matter.  Unfortunately, this was proven untrue by noting the uniform radio noise when observing space.

The next theory that came was the Collapse Fail Theory - again starting with the idea that there was no start to the universe, but rather that it was continually expanding (our cycle now) and contracting (just before our cycle now, and will happen again).  The theory says that in the case of a collapse of the universe to a near single point, with a lack of symmetry, the matter in the universe would simply slingshot around the center of mass of the universe and then expand again.  Professor Hawking disproved this, though I'm ashamed to say I don't understand.  He basically proved that asymmetry during collapse couldn't happen.

Then the discourse got lighter for a bit and he joked about the ambient microwaves from space being very ineffective at defrosting our frozen pizzas, as well as joking about his fear of the Inquisition, in light of his presentations at the Vatican (and a bit of a jab at JP2's lack of scientific knowledge [though I think Prof Hawking is allowed to make that joke regarding most other humans on the planet, to be fair]).

He discussed the rate of inflation in Germany after WWI, and how it wasn't such a good thing, but that the rate of expansion of the universe after the Big Bang dwarfed the German currency inflation, and that *was* a good thing.  On the order of one million, trillion, trillion fold within a fraction of a second.  (Turns out that this is related to a second thesis of his "Hawking Radiation" idea, more later.)


We looked at some maps of the universe, which was sweet.

Professor Hawking discussed how General Relativity doesn't cover quantum items, which fall under quantum theory.  Which is fine, except when you realize that the entire universe might be tiny as viewed from the outside, and in that case, our entire universe might follow quantum theory.  So we've got some challenges there, since we think we've got all the items under General Relativity under control / understanding.  To answer this, we learned about Feynman's "Sum History" of universes in which every possibility is indeed possible, but with various weighting for probability.

Now onto the "No Boundary Proposal" that Prof Hawking and Prof Hartle (UCSB) proposed.  In this, we have a formation of the universe in a Euclidean frame of reference, where there is no time, and simply space on each of two axes.  At some point, this transitions to a Lorentzian frame, where time replaces one axis and we now have the space-time that Einstein helped us understand.  (See image below) The explanation of the Euclidean frame is much like the bottom half of the earth.  If you traveled to the South Pole, you would find yourself at a point.  Now, if someone asked you to travel south, you would not be able to.  Not for lack of trying, or lack of space, but more that there exists no point more southerly.  It's undefined.  Just as the laws of physics hold on our Earth's South Pole, so should the laws of nature hold at the beginning of time, at this space X space frame.

He discussed *very* briefly the "M theory" which is a collection of theories that try and answer the deep questions such as "Why are we here", "Where did we come from" and "Why do we have this set of laws, and not some other set of laws."  Lots of multiple universe stuff going on for a minute.

In the Q&A we discussed Hawking Radiation which is the idea that radiation is emitted at the event horizon of black holes, and this is a possible way that the energy escapes.  In a second, later case, Hawking Radiation is the radiation emitted at the horizon of the Big Bang, which would have disturbed the uniform density of all matter to break up into dense pockets that eventually became galaxies.

A few other questions about Quantum Entanglement and the Big Bang Black Hole Theory, in which Prof Hawking discussed the necessity of an event horizon to move as matter is consumed (and the fact that nothing could know of this move before it moves, because there could be matter further ahead of you, about go go over the event horizon) as well as killing the idea that matter that enters black holes could somehow be forming other universes (and be a possible source of our universe).

http://www.sukidog.com/jpierre/strings/mtheory.htm
Posted by Holden at 11:18 PM