This past weekend I took a trip down to Agra! I took the train down, and the -km ride took about 5 hours. Unfortunately, I got on the wrong train car marked "S2" (they have an S2 in each class of service). After 3 hours someone pointed out to me that I'd spent too much to be riding back there and I found my way to the proper car.

Once in Agra I checked into a hotel and wandered around before finding my way to an empty rooftop restaurant that would serve me a beer. I felt bad guzzling the beer after a hot, long day of traveling as I then heard the Muslim adhan (call to prayer) from the minarets around town.

Its interesting being in India where half the population is Hindu and half is Muslim.
When it comes to artwork, the Hindu people celebrate many gods, and do so with many representations of them. See artwork such as floats, pictures, and music in last week's Rama post. The Muslims, however, never use any artwork containing images or representations of faces, which might be misconstrued as idol worship! (Hence, calligraphy and colorful symmetrical designs is about as ornate as you get.) Similarly, in some places (like Agra), its almost impossible to track down a beer, and in other places beer can be found in every corner shop. 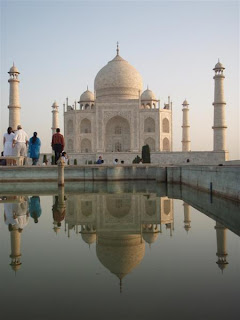 Saturday morning I got up early and visited the Taj Mahal up close. It's hard to describe the experience, but here are some thoughts:
[facts from Wikipedia ]

There's some amazing photos of the Taj Mahal here.

Some signs were really confusing for me: 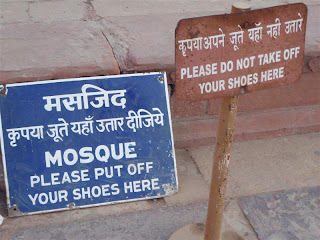 After enjoying the Taj Mahal at sunrise, I got a shower and breakfast before meeting up with an autorickshaw driver who took me around Agra for the afternoon.

Here's a reasonable video of what the streets of Agra look like. Very standard.
Videos take a long time to upload, hence I'm poaching this one someone else posted.

First we stopped at Agra Fort. This massive fort was built over one thousand years ago and at one point contained over 500 buildings. Unfortunately, throughout the years they have been destroyed and now there are only 30 left. 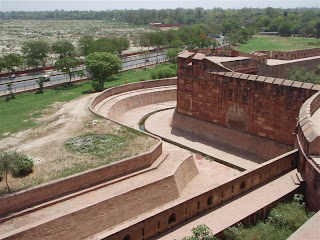 This picture looks down on the massive, once-crocodile-infested moat. If you wanted to capture the fort, you had to go through 4 gates, separated by 90 degree turns, all uphill, after crossing the moat. Pretty tough.

Maybe there aren't many building left, but there are some monkeys, thankfully. (And bats.) Everybody likes cute baby monkeys. But don't touch. :-) 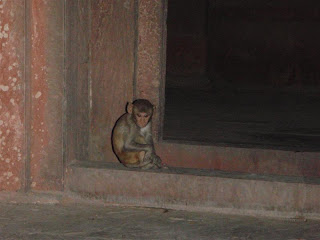 The fort is a major part of Indian political history, as all kinds of Rajputs and Mughal kings held it. Akbar the Great (no kidding) realized its central location and importance and decided to rebuild the fort, over 8 years with 1,444,000 bricklayers. That's a lot of people working on one project. That's about the same as the current largest commercial employer in the world: Indian Railways!
(info from Wikipedia )

One design element that I really like in all these buildings is the stone latticework. This allows cross-ventilation to occur, replacing hot air with fresh, cool air, continuously. Plus it's artistic.

Also artistic is the inlaid stone work visible in the 3 photos that follow (zooming in on the same spot): 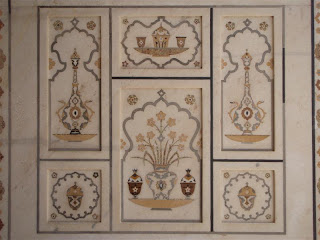 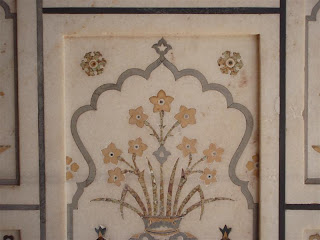 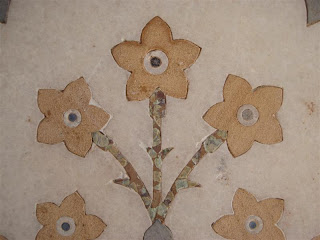 These three photos are from the "Baby Taj Mahal," a tomb finished around the time the Taj Mahal was started, as a final resting place for the grandfather of the queen buried in the Taj Mahal. There are many similar design elements, as you can see: 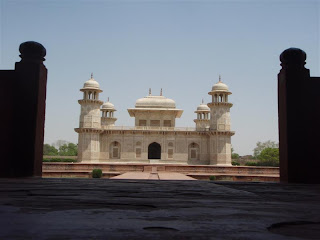 My last night in Agra I was able to appreciate the Taj Mahal and some monkeys: 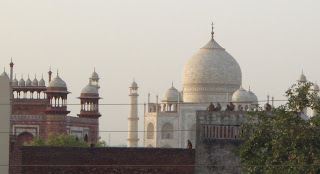 
Finally, I wanted to share some gun-safety advice. Here's how to properly tote your weapon on the very busy and hectic streets in India: 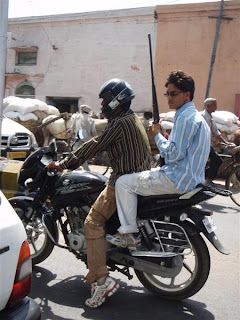 Ride on the back of a bike with no helmet, and don't hold on to the bike. Also don't look where you're going. Make sure you're riding on a "Pulsar" bike so it's really jerky acceleration.

Ended up taking a public bus home, which was a good experience. A good experience I don't really need to repeat. :-) It was 250 kilometers in over 7 hours... let's see. That comes out to about 20 miles per hour. Not bad.

I underwent a new record, for my body on that trip as well! 7 hours of extreme heat: At one point, my thermometer read 105.6 degrees F! I'm sure I'll see hotter this summer.
Expenses for the weekend (excluding gift-purchases):