I'm going to have to do this one a bit out of order, because I don't have the pictures from Bodhgaya.
That said, I only have with me a small portion of those from Varanasi, but I figured some was better than none.

We stayed a few days here and were really sick of the constant hounding by the boatmen and their helpers who constantly bombarded us with offers for rides on the river, hotel rooms, restaurant food, sarees, and oddest of all, spices (I'm a tourist -- I have no kitchen. Why do you think I would want some turmeric!?)

I loved all the various 80's-video-game-style graphics that adorned town, and couldn't stop snapping pics: 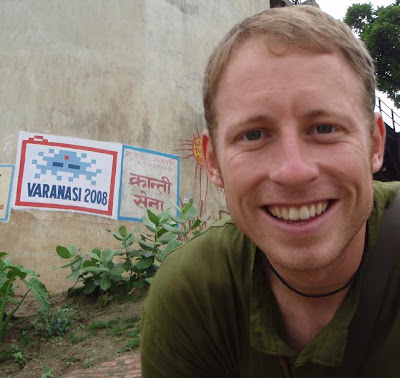 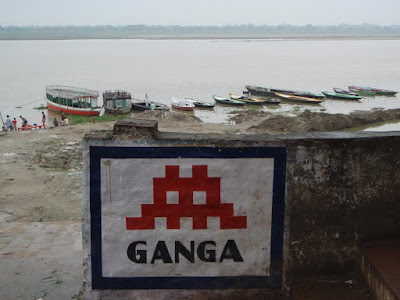 When is Varanasi, the holiest town for one of the largest religions in the world, going to graduate up to 24-bit graphics? (I should be thankful they have such taste in style, and celebrate their own city!)

Here's a lovely scene: Families and strangers cheering on young boys and girls who are engaged in a swimming race from a rowboat back to shore, in a very holy, public river.

Here's a scene that I'm less in love with: The swimmers are as young as 3 yrs old, and the swimming is happening in the Ganges. The Ganges is not particularly clean. In addition to people drinking and swimming in the water, it is used for bathing, a trash dump, a sewage dump, and for the disposal of human bodies (either post-cremation ashes or if you happen to be alive, but in a coma). Apparently "80% of all health problems and one-third of deaths in India are result of different water-borne diseases." (Source) Yikes. You can do more research, but I found that there is roughly 10,000 times the WHO limit for bathing of fecal coliform in the water. That's what I want my kids swimming in. MMmmmm!


And here's me earning some extra rupees: 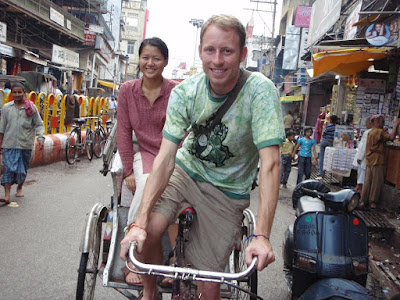 ps. I realize that I have not posted about the better sides of this city, and I apologize. I did see some pretty awesome stuff, I just don't have the photos with me now.