Besides gaining fame for starting the revolution against the British in 1857, Meerut is known for its Mela, or fair. "The Nauchandi Mela has been a tradition of hundreds of years. More precisely, it started way back in 1672 AD as a one-day affair, mainly for cattle traders... Significantly, the mela is a rare symbol of communal harmony with Hindu and Muslim shrines – Nauchandi temple and the dargah (shrine) of Muslim saint, Bala Mian – lying close by. Visitors pay obeisance at both the shrines irrespective of the religion they belong to." -IndiaProfile.com

Unfortunately I didn't know about the shrines, or even the reason for the fair until I got home, but I did get to "enjoy the moment" by learning about two awesome fair foods that we don't have in the United States. The first is a solid cylinder of ice cream, about a meter long and half meter in diameter that is manually spun about its axis and shaved off into little cups. Wonder if Zamboni makes a full-serve version? Love it. Here's a picture for now: 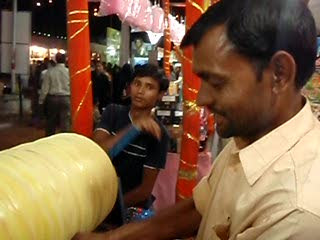 The second food I don't remember the name of, nor can I describe well. It's a meter wide, 1 inch thick (just for you fans of the English measuring system) flaky fried pastry which you use chunks of to scoop up semi-sweet translucent brown paste. Tastes awesome. Hard to remember the name, and hard to describe the taste. Once again, all I can offer are pictures. 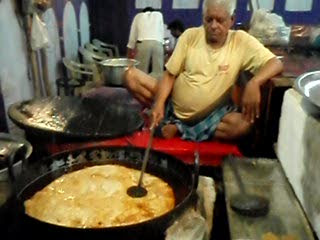 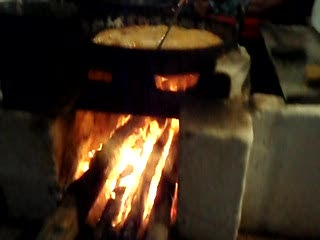 Gotta love the 8 foot long fire logs that they have sticking out into the busy aisles. Talk about a fire hazard. Although I'm sure the bare-footed cook here has a charged fire-extinguisher close at hand for all the hot oil and flames. Sure.

Plenty of ultra-safe rides there as well. My favorite is a manually operated ferris wheel, which the operator climbs up / scales the outside rim of the wheel and sometimes the cars, to cause the wheel to spin. Then he just rides down in order to advance the cars to let people on and off. Like I've noted previously, labor is cheap in India.
Posted by Holden at 12:03 PM