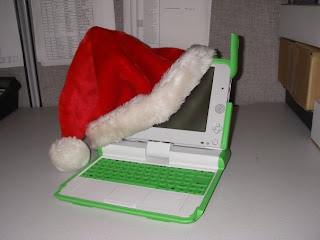 The first thing I did today was to sit up in bed, pull out my OLPC laptop and check the news on a few of my favorite sites, check my email, and generally cruise the web. I haven't started posting to this blog yet, but thats fairly trivial. The main thing is that the keyboard is a bit small and I'm still getting used to it. I guess I'd be mad if it wasn't kid sized anyway...

The point is that my Christmas gift to myself (the cute OLPC laptop to the right) arrived before Christmas, and was played with at work (I bought one on work's dime as well, so they were "meshing" a bit).

I think that despite the whole "technology for the sake of technology" argument, these laptops are good for kids. I agree, we need to do more with clean drinking water. And food. And education. But I also think that there have been ongoing efforts into those realms for years, and it is great for people to make a first stab at investigating the effects of technology on those without it. If todays youth from third world countries are ever going to compete with those from first world countries, this type of device is whats going to be required. Vast distances are shrunk, language barriers overcome, and in a way, the playing field is leveled.

Thanks to the team that put this together (both technically, and from the business end), I do feel a modicum of satisfaction, knowing that I helped drive up the volume by 2 units, and thus down the price, and at the same time donate 2 units to the third world efforts. And, I also like that the 2 donated units will be later versions than mine (and thus improved)!

The OLPC has some really neat stuff in it that, I think, will actually teach kids stuff. These are the applications that move the device from the "toy" to the "tool" category, such as the Python programming environment. Also, the measurement suite enables students to learn about science by performing actual experiments, and quantifying results. Logically, the next step is to use the built-in digital video camera to post / share / publish their learnings with peers as well as the outside world.

I'm excited to see how they're received. So far they're mostly in South America and southeast Asia. Check it out!

(Do people edit thier blogs? I have a feeling mine might be a stream-of-consciousness style blog, so please, forgive the errors, and let me know if they get annoying.)
Posted by hbonwit at 7:41 AM